Alexey “Solo” Berezin has talked about the TI 7 opponents who Virtus.pro practiced against at the bootcamp, the reasons Western teams are going to dominate Chinese ones, and what he felt at his first International. 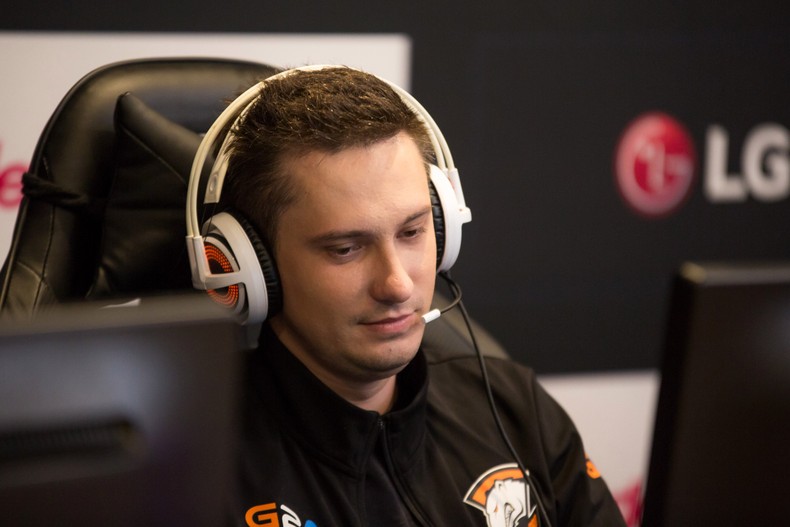 – At the bootcamp, you followed American time, going to bed at 8 a.m. and getting up no earlier than 4 p.m.  How did you arrive at the idea?

– It wasn’t what we originally planned. We’d already got going when I thought it would be easier this way. We wouldn’t have a lot of time left to acclimate in the US, and the guys liked the idea. So together we decided we’d get into our Seattle daily schedule beforehand.

– Did the bootcamp go without any emergencies?

– This bootcamp was organized flawlessly, and there were no external factors getting in our way. As far as Dota’s concerned, we accomplished about 75 percent of what we’d been planning to do. We’re going to have a few more days, we’ll have time in Seattle [this interview was taken before the team left for the US – Ed.], and we’ll have the group stage to rehearse a few things.

– Who did you practice with at the bootcamp?

– We played against whoever we could find. We arranged games with our rivals at the International, and if none were available, we practiced against Russian teams. I’d say we played about ten teams during the bootcamp. Five of them are going to be at TI 7. For example, we were able to practice against the Peruvians from Infamous. We had a ping of around 120 on either side. It’s not very comfortable to play like that, but we got an idea of what they’re like. I can’t really say they’re weak. No, the Peruvians can be a surprise at The International. They played in a disinhibited way, unstrained, not afraid of anything. Sometimes we punished them, sometimes they pulled off something daring, and overall, their playstyle was completely laid back.

– Are you going to primarily work off of your own strengths at TI 7, or have you studied every opponent in detail?

– Directly before a match, we analyze each team that we’re going to play against. We start with their drafting preferences. Depending on their picks, we think of what actions that opponent is going to take. It’s important to get an idea of the early actions that the game is built upon.

– At The Summit 7, you added a lot of variety to your drafts, and tried some new heroes.  Did you come upon something you hadn’t noticed before?

– I noted a lot of things to myself. Drafting actually gets simpler when you don’t have a specific hero in mind, looking instead for one that could replace it or thinking of something new. In virtually every game, we had a good lineup that had its own forte – one that you could overlook in regular mode, as people usually play with a small hero pool. Now obviously, every hero’s abilities have been common knowledge for a long time, but it’s not every day that you get to field-test something new in an actual serious game and not during practice.

– Since, I think, the third International, Valve has been asking to report tricks of that sort if a team discovers one. But even if we don’t want to tell, they’re asking to at least refrain from using them.

– ArtStyle named European teams as your main rivals in Seattle. Do you agree?

– I agree completely. China has been looking weaker than the West so far, judging by what we’ve seen from them before the International. This year, OG has been looking good, and Team Liquid have got into form. I think the West is completely dominating China at the moment. That said, every year there’s a surprise of some sort coming out of Asia; last year, if I’m not mistaken, we got three Asian teams among the top 8. As far as we’re concerned, EG and OG are going to be our principal rivals in Seattle.

ArtStyle: “We have a flexible team, we can play differently”

– Have there been any new trends in Dota that we’re going to see at TI 7?

– Dota has reached a state in which you can deliver surprises with any lineup on any hero. When you’re playing trend vs trend, that is, meta vs meta, you know what to expect. But when you’re playing meta against something unusual, the heroes you pick may struggle.

– Do you remember watching the first International?

– I was on a hiatus from Dota at the time; I hadn’t played for two or three years. A friend called me and said Dota 2 was out, and they were holding a tournament with a million-dollar prize pool. “Come over, let’s watch it together”, he said. In the end, I stayed at his place for three days. We saw the way Na`Vi and M5 were playing at that first International. So basically, that was the first time I saw Dota 2, and it made me want to go to TI as well. I did after all know almost every player in the CIS who were at that International. It had been three years since we played together, and there they were, competing for a hefty sum of money and an awesome title. It was interesting, it was fun, it was unusual, and I kept thinking, “How come I’ve dedicated a lot of time to this, I was with them all along, but they’re there now and I’m not?” At that moment, I really wanted to go there as well.

– When you did go, was it everything you’d expected it to be?

– I first went there as an analyst in 2014. Of course, those weren’t the same emotions, not the same experience. I was just working, I saw players emerge from their practice rooms and go to group matches, I saw their tension and their emotions. When I qualified for Wild Card with Vega in 2015, it all ended too quickly, but I did get to feel the atmosphere of the tournament a little. I was very nervous before and after games, but during matches, I learned to stop thinking about where I was and who I was playing against. The opponent that we lost to ended up placing second in the tournament. What I’m trying to say is that it was something seriously high-tier, and you could feel it clearly.

– Virtus.pro is going to TI 7 with an intent to win it. What will a potential victory mean for you?

– I’ve said this before in may interviews: back in the days of the first Dota, I watched a lot of tournaments from the ASUS and WCG series, but couldn’t come to Moscow to take part. I only played online. Already at that age, I wanted to be in top-tier tournaments. Ever since Dota 2 has come out, my goal is to win a world championship held by Valve, the game’s creator. Winning a Valve tournament is what all Dota players are aiming for. I want to prove to myself I haven’t wasted 12 or 13 years of my life playing Dota. And I won’t lie, a 22-million-dollar prize pool means you can support yourself for years if you invest it well. This isn’t the primary goal, of course, but it is a pleasant bonus.

– Your current Virtus.pro roster has been playing together for a year already, which is a rare thing in Dota.

– I had a similar experience with Vega, and kicking Pasha out of it was a big mistake. That was because the five of us couldn’t stay together until the end, even though we’d been playing for a long time. With Virtus.pro, from the very beginning, I was putting the team together in such a way that we wouldn’t have to reshuffle. I don’t see the point of reshuffling when people are always prepared to talk to each other and resolve problems. We’re doing fine in that regard, and no-one’s level of play has been slumping. So we’ll be able to play together for a long time yet.

– Do you ever grow tired of each other?

– We do a little every now and then, of course. How could we not? You’re in an enclosed space for 10 hours a day, first playing with the same people, then spending the rest of your time with them. But that’s our job, and it isn’t like that all the time; we can take a break from each other between tournaments.

– Is extending your contracts ahead of TI 7 important for you?

– Acknowledgement was what mattered to us. We may not have won yet, but we’ve been close to a serious victory. Our team has done a lot of work, gone a long way and reached a solid level. I think we deserve to get some praise for that as a team. It was great that it coincided with extending our contracts, and we got better terms. We discussed everything then, and agreed we’d keep this going for a long time.

– You’ll be playing at TI 7 in what will be the small hours of the night for the majority of your fans. Could you give people some motivation to watch your matches instead of going to bed?

– I think The International is a major celebration for all Dota lovers and fans. If you have the opportunity, or even if you don’t, do find the time to watch our games. Cheer for us, support us, give us a boost of your energy and emotion. We’ll be trying hard for you!